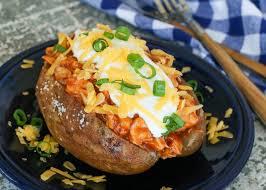 What’s the best way to bake a potato you ask?

Well personally I think that this is dependent upon your time. There are three widely accepted methods of cooking a “baked” potato, each with it’s own advantages and disadvantages.

Method 1: Baking it in the oven.

What I love about baking a potato in the oven is that it seems to have a little more taste then that of a potato prepared by other methods. This is probably because it gets a nice crispy texture without getting too mushy. The downside of this method you ask? Well it can take anywhere from 40 minutes to an hour depending on the size of the spud!

The advent of the microwave has greatly reduced the amount of time required to cook up many a things. There are both good sides and bad. The good is that a baked potato can be heated up in just 15 minutes. The downsides here come in the form of overcooked ends that become hardened in a hurry and no one wants that!

Method 3: Boiling – The choice of most restaurants.

While boiling a potato takes a little longer than that of it’s microwaved cousin it can cut down overall cooking time by 15 to 20 minutes when compared to the oven baking method. One other nice point is the addition of water to the cooking process allows for potatoes that are softer and because of the salt added sometimes a little more flavorful.

For me the best way to bake a potato really depends on the time in which I have. If I have all the time in the world I bake them in an oven. If I’m pressed for time the microwave or boiling methods work great! I do however; feel that the way in which you bake your potato doesn’t matter as much as how you plan on topping it.

Yesterday I started a series of posts about some of America’s greatest ball park foods. Coming in at my second favorite little league game favorite is the Barbecue Baked Potato! This portable potato is not only quick and easy to prepare its probably the best way to top a potato ever invented.

To begin our barbecue baked potatoes cook your “baked” potato using the method of your choice. Pull it out of the oven/microwave/pot and cut it open. Then using a fork, press the softened potato into a small bowl like so.

Once you have your bowl it’s time to fill it! Put your barbecue flavored pulled pork into the center. Now, if you have all the time in the world you can make this from scratch. Or if you’re looking to save some time I find that Lloyds makes a great BBQ pulled pork that can be heated up in the microwave in 2 minutes flat.

Once you have your barbecue goodness on the potato it’s time to add some cheese.

Finally, no baked potato is complete without a dollop of sour cream! One thing I like to do is keep it in the tin foil used to bake it with (this is provided you don’t use the microwave or boiling options) to create a little portable dish. If you do choose another method there’s nothing stopping you from putting this innovative plate idea to use once your tater is cooked. See you at the game!

One more look at this bad boy….. Oh yeah!