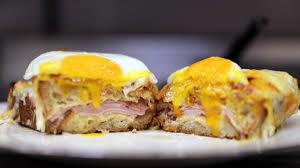 And when I’m on a mission nothing can stand in my way. Not even the sacred traditions of what time certain meals are to be enjoyed.

Heck who am I kidding? I love to do breakfast for dinner all the time! Maybe it’s the kid in me but there is something about it that is comforting to me when you take a traditional breakfast meal and make it for dinner (like French toast).

But this week was a little different not only was this inspiration part kid it was also part MacGyver of me as I try to clean out my fridge (the very important mission).

Why is this such an important mission? Well in two weeks I will be taking a 1 week long vacation! I’m going to be heading north to Minnesota to stay at my family’s cabin in an effort to escape the heat of Texas.

As I was on this mission I noticed that a had an unusually large amount of Gruyere cheese left that desperately needed consuming (at least that’s what I told myself) as well as a couple dozen farm fresh eggs. Now when I say farm fresh eggs were talking strait from my parents neighbors farm where the chickens run free and peck at your feet as you collect your eggs fresh. I can’t even begin to tell you the difference these eggs make when you are baking (or in my case making Croque-Madames).

I can even hear them in the kitchen going…. Gruyere…. Ham….Bread… well I could definitely do a Croque-Monsieur ….but what the heck am I going to do with all those eggs? I’m leaving for vacation in a week…. Hum… this gives me an idea!

To being our Croque-Madame we in fact start by creating a Croque-Monsieur. In a small saucepan melt some butter over low heat. Then add 2 tablespoons of flour and cook stirring for two minutes to create your (yup you guessed it) roux. What I love about a Roux is that all great sauces tend to begin with one!

Next we whisk in our milk and bring to a boil. The sauce will begin to thicken as we reduce the heat and allow to simmer for five minutes.

While the sauce is simmering shred a ½ cup Gruyere cheese. Add this and the mustard into the sauce and whisk until the cheese is melted.

Remove this form the heat and sprinkle with salt, pepper, and nutmeg. You now have a classic Mornay sauce (Which is one of the best parts of the Croque-Monsieur/Madame).

Now it’s time to build your sandwich. I know the recipe says to place the sauce on first but I find this difficult and confusing. Begin by buttering one side of our bread and placing it butter side down on a pan. Next spread 1 tablespoon Mornay sauce over your slices.

Stack your sandwich high with ham and some moderately thick slices of Gruyere. Don’t go skimping on the Gruyere here (you’ll thank me later).

Butter the remaining slices of bread and place them butter side up on top of the Gruyere. Allow these to cook on your skillet for a few minutes on each side until each side is a golden brown.

Spread the remaining Mornay sauce and place these in a broiling pan. If you don’t have a broiling pan don’t panic as it’s not really necessary here as this will not need to drain anything. Broil your sandwiches until the Mornay sauce begins to brown (about 2 minutes). While these are browning quickly fry up some eggs to place on top. When the Croque-Monsieurs come out of the oven allow to cool for 10 seconds and then make them Croque-Madames by placing the fried eggs on top. Bon Appetite!

Croque-Madame
A slightly altered recipe from The Gourmet Cookbook

Melt 2 tablespoons butter in a small heavy sauce pan over moderately low heat. Stir in flour and cook, stirring, for 2 minutes to make a roux. Whisk in milk and bringto a boil, whisking constantly. Reduce heat and simmer, whisking occasionally for 5 minutes.

Meanwhile, chop enough cheese to measure ½ cup. Whisk chopped cheese and mustard into sauce, then whisk until cheese is melted. Remove from heat. Season with salt and pepper and sprinkle with nutmeg. Cover with wax paper placed directly on surface to keep warm.

Preheat broiler. Leaving sandwiches in skillet, spread tops of sandwiches evenly with remaining Mornay sauce. Broil 5 to 6 inches from heat until sauce is bubbling and golden in patches, about 2 minutes. Transfer sandwiches to plates.